The popular support for Trump and Brexit may be explained in an unexpected space in Chichester, The Pallant House Gallery (22 October – 15 February).

Painted after the trauma of the First World War, Morning is by D Proctor (1929) and shows a girl alone, at the brink of waking.

The exhibition compares this to a classical statue of Ariadne in Phrygian marble. The curator’s thesis is that the artists exhibited are engaged in a project that has some kind of parallel with Ulysses.  They are using myth, or classicism more generally, to give a shape to the “immense panorama of futility and anarchy” of the postwar world. And it is science that is ultimately  responsible for this trauma of the modern catastrophe. 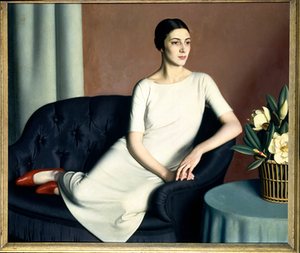 This way of co-opting the classics is through clean lines and ordered compositions. After catastrophe there is order, after war the people are cold and tired.