An aurora has been spotted outside our Solar System for the first time. The light display is around a brown dwarf about 18 light years away in the Lyra constellation. Its luminous glow looks like the Northern Lights, but is up to a million times brighter and more red than green in colour. 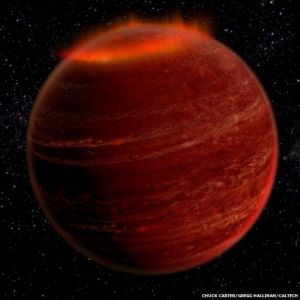 This artist’s impression (above left) shows the brown dwarf’s aurora, which is red and extremely bright. The photograph (above right) is of the Northern Lights on Earth.

On Earth, shimmering auroras give dazzling displays. The glows can also appear around all the planets in our Solar System. They are caused when charged particles from the Sun interact with the atmosphere.
But the illuminated brown dwarf, an object which is too small to have become a star but too massive to be a planet, lies further out in the galaxy.
Called LSR J1835, it was observed using the Very Large Array radio telescope and the Hale and Keck optical telescopes.

The brown dwarf is a sort of failed star itself, and has no other star like the Sun nearby to blast it with charged particles.
Either, the aurora is made from material being stripped off the surface of the brown dwarf to produce its own electrons, or an undetected planet or moon around the dwarf is throwing off material to light it up.

Some of Jupiter’s auroras are produced in this way, as charged particles are emitted from volcanoes on its moon Io – 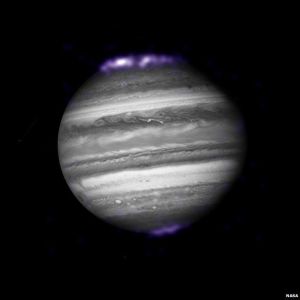