Cornelia Parker makes hanging objects by exploding single structures. Just try putting the fragments back together again: instead, the installations appear to float. She has called them ‘free radicals’ and compares the creativity in her work to that of a physicist. For example, Anti-Mass is an array of timber from an arsoned church:

Above, right, she filled a garden shed with stuff from a car-boot sale and asked the British Army to blow it up. 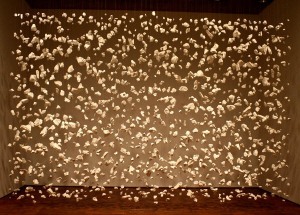 The Darkness presents pieces of chalk broken off cliffs from the Sussex coast.

Neither From Nor Towards is made up of bricks eroded by the sea, picked up from the beach at Dover:

Does the human act of blowing these structures to smithereens restore them to their former natural state? Instead, the process of alteration is one-way. Entropy sees to it that there is no going back. Throw ink on the carpet and you can’t put it all back in the bottle.

Parker’s work will soon be on show at the newly refurbished gallery http://www.whitworth.manchester.ac.uk

The Observer photographed her with remaining sheets of material that made RemembranceDay poppies: