Any astrologer will tell you that accurate timing of a birth is essential to make the right predictions about how that life is to be lived. This was well-understood by one of the Hindu Maharajas of Rajastan, Jai Singh (1686-1743). He was only 14 when his father died and was crowned King of Kushwaha.

He was good at maths and science, so to help the accuracy of astrologists, he set about making sure that time could be measured to the nearest second. 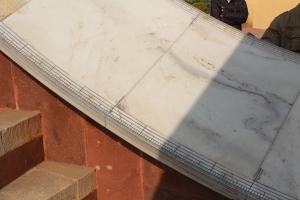 Somehow, Singh gained access to all the mathematical and astronomical knowledge available, and he set about devising ways of using the sun and the stars to plot the geometric configurations necessary to tell the time. He designed a number of large sundials and sextant-like structures to make frequent measurements.

Some of the early prototypes were made of metal but the final instruments were built of stone and plastered in terracotta.

By 1728 this Observatory in Jaipur was completed and now it is restored as a tourist attraction.

The importance of accurate dating in astrology is shown by Jai Singh’s own life. As a Libran, it made him generous, interested in art and science. His astrological chart continues: “Saturn is posted in the first house of Libra, making him a super-intellectual. Jupiter in the fourth house under Capricorn, and also the tenth house aspect of Saturn, made him lose his father and ascend to the throne at an early age. A Scorpion in the second house made him a womaniser, and he is thought to have had 31 wives.”

Small Samrat Yantra – a triangle on the place of the local meridian, 27 degrees to the equator: the geographical latitude of Jaipur is 27 degrees 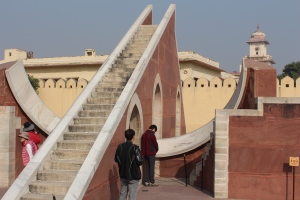 Most accurate is the largest of all, the Great Samrat Yantra, 27m high and casting a shadow across its time-scale with a two-seconds accuracy.

What was not measured was how the people of Jaipur benefitted from their special astrological knowledge about their future.