The Kalahari Desert occupies a good part of Namibia and Botswana, with sand hills and dry scrubland. 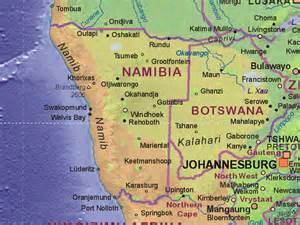 In this month’s Nature Geoscience (6, 1027-30) a group of geologists from Bremen led by Sebastian Hoetzal report their work on a core bored offshore Namibia. Parts of the borehole were known to be from sediments from 3 to 8 million years old and contained pollen (photo below), charcoal and the stable isotopes from plant waxes.

The results show that grassland was expanding through the 5 million year interval represented by the sediments that were cored. The pollen and charcoal show cycles of forest and scrubland burning to be succeeded by advancing grassland. Slowly, the prairie spread, indicating an increase in seasonality. The climate became drier, warmer, and there was less CO2 in the atmosphere.

Not surprisingly, the local artists have made their own records of the extreme climate of their territory.