The Dodo is an iconic image in the subject of extinction and human impact on the planet.  There must have been a last Dodo and this linocut was made as a memento mori for lost species.

Images of now extinct animals hold a fascination for us, evidence of a world constantly in flux and which point to the uncertainty of our own future existence.

I have visited the the Grotte Pech Merle in south west France many times. These caves have 25,000 year old drawings of Mammoths and spotted horses, species now extinct but were existent  when our ancestors drew them.

The extinction and evolution of species are inextricably linked.

The subject is full of images of extraordinary creatures sometimes even more fantastical than the mythological beasts that artists have been depicting for centuries.

I made a series of etchings inspired by artists first attempts at drawing newly discovered species…. 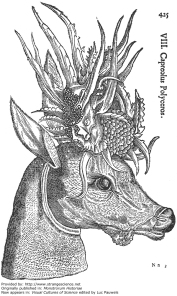 Often these first ‘scientific’ drawings relied on second hand descriptions of animals with the result that the images were more the product of the artist’s imagination than any kind of reality.

A few years ago some friends visited the Galapagos Islands and came back with wonderful photographs of their experience. This coincided with the 200 anniversary of Darwin’s birth and served as the inspiration for the print ‘Darwin’s Garden’. Following on from this print I made ‘Ark on the South Bank’ an imagined future scenario of global warming and rising sea levels. 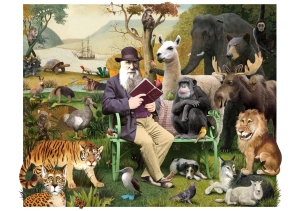