Aristotle (384-322BC) recorded some of the earliest thought-out views of animals and plants, presenting them in three large works: History of Animals, Parts of Animals, and Generation of Animals.

(after a 330BC bronze by Lysippus)

In our own culture the most informed translation is by d’Arcy Thompson (1860-1948), an eccentric scholar of Greek and Biology who was Professor of Natural History at Dundee. In 1913 he published an outline of his translation: On Aristotle as a Biologist:  with a prooemion on Herbert Spencer. 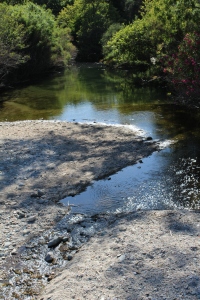 Aristotle’s observations of animals, plants and ecology were mainly from a lagoon at Lesbos, similar to this stream inlet to the Aegean Sea, not a hundred miles away.

He described deer and weasels drinking the fresh-water. There were purple Murex shells, starfish, scallops (exterminated by drought and fishermen),sea-urchins (surviving into winter), cuttle-fish (no octopus), little gudgeon and chameleon. Interpreting this work, Thompson went on to give his own unique descriptions of biological structures and morphology.

The Nobel Laureate Peter Medawar said that this was “the finest work of literature in the annals of science that has been recorded in the English tongue”. The book, On Growth and Form (Thompson, 1915), reveals repeating patterns in nature, and suggests that biology follows Laws like those of the physical sciences.